You show me a company that cares about maintaining a caring, safe, nurturing, FUN work environment, and I will show you a team of employees that loves to come to work! Below is a recap of our recent Office Olympics at Mannix Marketing. While most of our employees work from our main office in Glens Falls, NY, we also have employees who work remotely, so care was taken to ensure all employees, near and far, had a shot at playing a part, competing and winning a medal for their team. More on this later.

Please note: Hosting the Office Olympic Games DID take time to plan, compete and prank while the games were in session. If you plan anything fun, you can expect the same, but you can also expect overall productivity and company morale to be on the rise. We found that our employees were quick to fit the games into their schedules (held at 2pm daily) and eager to make up for lost time. It is rewarding to foster a positive work environment and inspire a positive work ethic among your employees.

Our recently hired Melissa Haas tells you in her own words how the 2014 Office Olympics played out: 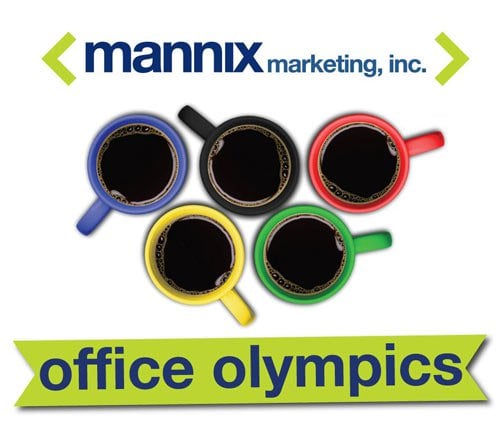 As the new Office Manager at Mannix Marketing, I was so excited to bring new traditions to the office and cultivate deeper friendships. With the Winter Olympics being this year, I knew I had to take advantage of the hype. I split the company into three countries and assigned them a color. They named a king and that person was their team caption. Our countries’ names were Blue Steel, Green Acres, and Scarlet Fever. Guess what their colors were. Everyone received a bandana in their country’s color so they could show their team spirit in the upcoming two weeks.

I knew this would be a huge project to handle myself, so I asked my friend and coworker, Nichole to join me in the planning. In the end, that was the best decision I could have made. She was so enthusiastic about making this happen. We had a lot of fun bouncing ideas off of one another. Everyone had a blast competing, and I sent out a recap of each event afterwards. Read on to see all the fun we had and to get ideas to spur your next office competition. 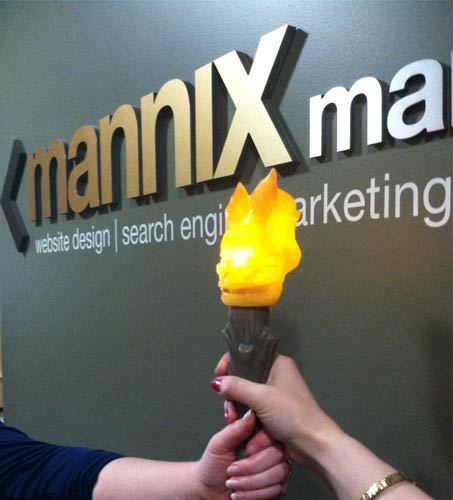 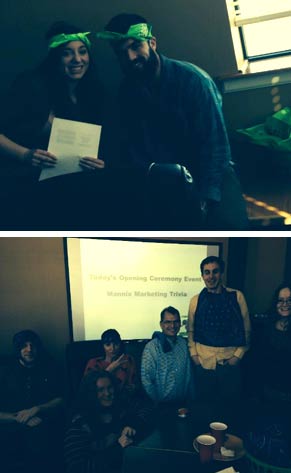 We kicked off our First Office Olympics with a pizza party and trivia. Using Easy Buttons from Staples, the first person to buzz in with the right answer got a point.

The questions were mostly facts about workers in the office or about Upstate New York.

Examples of the questions:

Day 2
Jeremy from Scarlet Fever took home the gold in a very intense tiebreaker game of Paper Wad Basketball. Russ from Green Acres was just short of the gold by one basket, and Shea from Blue Steel didn’t score and blamed it on an injury. 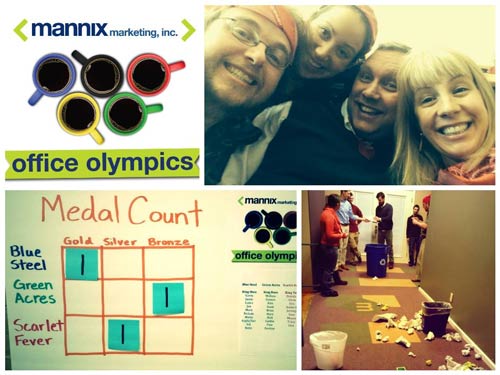 Day 3
I called it the Kitchen Challenge. Players were to eat a jar of baby food that contained chicken, rice, peas, and carrots. After the jar was finished, the athletes ate a small stack of saltine crackers. The first person to whistle after eating the crackers won. 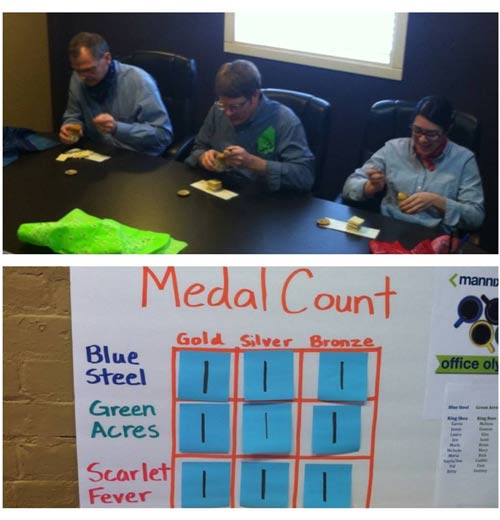 Damon from Green Acres took home the gold. Mark from Blue Steel had a great start, but the crackers slowed him down near the end. Maura from Scarlet Fever took one bite of the baby food and forfeited. The scoreboard was all tied up!

Day 4
This event was for those with a steady hand. Each racer was timed on how fast they could go up our building’s stairway with a coffee mug of hot water. If they spilled, 5 seconds would be added to their time, so being fast and steady was key.

Our CEO Sara Mannix (right) from Scarlet Fever raced ahead and took gold. Scott (center) from Green Acres didn’t spill a drop of water and came in second. Valleri (left) from Blue Steel didn’t have much of a steady hand and took home the bronze.

Day 5
Competitors were asked to put their grammatical skills to the test for this competition, which was ideal for the out-of-the-office folk to participate. It was a close race, but Caitlin from Green Acres took the Gold with 100% correct in 52 seconds.  Silver went to Betty from Blue Steel with 100% correct in 3 minutes and 33 seconds and Bronze to Lisa from Scarlet Fever with 80% in 3 minutes and 26 seconds.

Day 6
Snow Day. Event was postponed. You might have heard, NY got some snow. Some serious snow. Life happens, but that just meant doubling up another day! 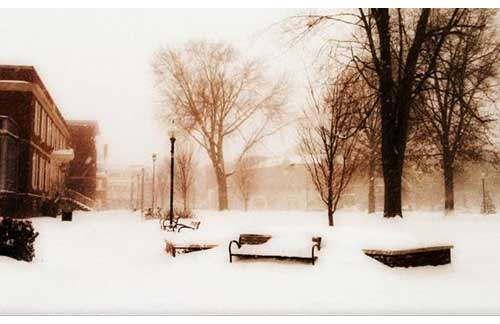 Day 7
The Trivia day went so well the first time, so we decided to bring it back for another day. It was a heated trivia game, and Scarlet Fever team beat Green Acres by one point. Blue Steel came in third and had the most spectators – so they won in their own way.

Day 8
Another good one for those remote employees… this competition tested office Olympians on their words per minute abilities (finger skating, if you will).  We used https://www.typingtest.com/ It was a close race, but Scott from Green Acres took the Gold with 59 WPM and 9 errors.  Silver went to Maura from Scarlet Fever with 58 WPM and 4 errors, and Bronze went to Kayla from Blue Steel with 37 WPM and 1 error.

Day 8 (PART II)
We also did a second event this day to make up for the snow day. As an Internet Marketing Business of 17 years, we’ve seen a lot of pretty bad websites. Each country had to choose the worst website they have ever seen and submit it to a third-party judge to decide which one was the worst.

(yes, those links above are coded rel=”nofollow” — we don’t want Google to associate us with them!)

Day 9
Competitors were asked to put their graphic design skills to the test.  They were asked to create a human-animal hybrid of Scott and the head of a weird-looking ostrich.
It was a close race, but Jamie from Blue Steel took the Gold. Silver went to Melissa from Green Acres. Bronze went to Brendan from Scarlet Fever. The results are pictured at right in winning order.

Competitors teamed up and raced for the gold yesterday in a game of Get-Out-Of-The-Beanbags and right into a wheel barrel race. We have these whale-sized beanbags that make you feel like you’re sitting on a cloud. However, it’s incredibly hard to get out of them once you’re in. Jen and Shea from Blue Steel took home the gold with 23.57 seconds. Scott and Melissa from Green Acres took silver in 25 seconds. Toby and Maura from Scarlet Fever received a bronze with 34 seconds.

Office Pranks
Day 10 was also the last day to compete of the Office pranks event. There were many pranks done but the worst was done to me. See below. Blue Steel took gold for their many pranks. Green Acres had several pranks but not quite as good as Blue. Scarlet Fever’s pranks were subpar and they took the bronze.

Day 11 – Final Ceremonies
On our final day, we had a chili cook off. We have many variations of chili including: vegetarian, spicy, and venison. Green Acres took gold with the venison chili. Blue Steel made a spicy chili and took home a sliver. Scarlet Fever came in third. Everyone agreed that all the chili tasted fantastic. 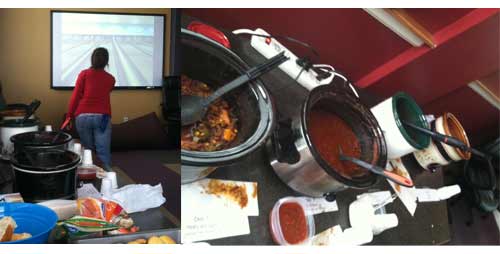 After that, we finished the first Mannix Marketing Office Olympics with a Wii bowling tournament.
Nichole from Blue Steel was hitting a lot of strikes and took gold. Toby, (a rookie to the Wii) came in second. Russ (the lefty) came up short and took home the bronze.

Blue 26
Green 29 (WINNER)
Red 23
We realize not all offices lend themselves well to games of this magnitude, but it could be fun to try something a little out of the ordinary and see the response. Does your office do anything fun like this? Have anything in the works? Let us know in the comments below!

psssst! Looking for more office fun? Check out these 10 April Fools Office Pranks That Won’t Get You Fired!