A new feature recently hit the Google mobile app which lets people view tweets in Google’s mobile search results without being logged into Twitter. This is good news for people who don’t use Twitter but may be interested in something or someone that is active on the platform. The new feature will also benefit social media users, as tweets can now potentially get more reach than they could when you had to use Twitter to find them. 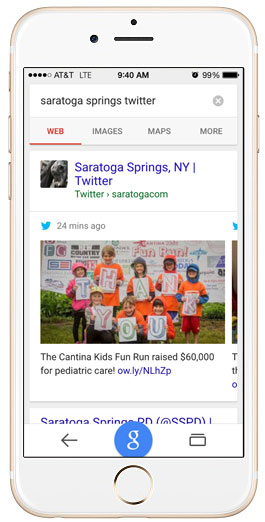 How Tweets are Displayed in Mobile Search Results

Do you have a favorite brand whose Twitter campaign just went viral? Rather than searching for it directly on Twitter, you could look it up on Google by doing a simple search for the account: Saratoga Springs Twitter.

The four or five most recent tweets from the account appear in the mobile search results, allowing searchers to scroll through and interact with the tweets. Click on a tweet to open it up, view the image, or interact with the link!

If you want to adjust your Twitter strategy, then focus on creating compelling calls-to-action and experimenting with the many factors that can help improve click through rates. While retweets and favorites  can go a long way and are responsible for the a portion of the success of viral content in the first place, not everyone who sees your tweet will have the ability to retweet, favorite, or reply.

The update is being rolled out gradually on the Google App on Android and iOS devices, then to mobile browsers, in English. Desktop and more languages will come next.

Is this update going to make or break your Twitter campaign? Certainly not. But it is a cool new feature that brings a slight change to the game. When the update is fully rolled out, you’ll see tweets appearing in all Google searches, which makes this an excellent way to get real-time information when something big is being discussed on Twitter.