Skip to content
Home » Blog » What Is All This Talk About SOPA?

Update On SOPA: Shortly after this original post, the House Judiciary Committee Chairman postponed plans to draft the bill. The SOPA version of this legislation is pretty much dead right now, but we must continue to keep Congress from enacting laws that will hurt innovation and development of the Internet. 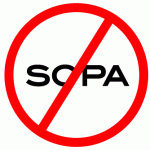 The Internet has been buzzing about SOPA lately; how you can oppose it, how to sign the petition, what you should do about it. But what if you don’t know anything about it? I am without a doubt, opposed to the SOPA bill, but I don’t condone opposing anything if you don’t know the facts. You wouldn’t sign a petition if you didn’t know what it was for, would you?

I am not a politician or an expert on legal jargon, but I will try to break down the important points in the SOPA bill so that you will have a better understanding of what effect it will have on the Internet that we know and love.

Let me start by providing you with the full text of the bill (as of 1/15/2012) in the case that any of you are legal experts, or if you want to follow along and try to decipher the gobbledygook.

The first part of the bill that I would like to bring to your attention is Section 102(a)(2), which includes Action By Attorney General To Protect U.S. Customers And Prevent U.S. Support Of Foreign Infringing Sites. This heading causes you to think that this bill will somehow protect you. What this section really states, is that the attorney general can take action against foreign sites if “the owner or operator of such Internet site is facilitating the commission of [copyright infringement].” This makes me nervous, as it includes sites that simply facilitate copyright infringement, not encourage or enable it.

This also gives the AG full power to censor foreign sites that the government doesn’t have jurisdiction to remove. If this becomes a reality, the power of web censorship could get out of control in a hurry. In my opinion, the SOPA bill should be opposed based on this alone, but there’s more.

This next part, Section 103, gets pretty confusing. The section is titled Market-Based System To Protect U.S. Customers And Prevent U.S. Funding of Site Dedicated To Theft Of U.S. Property. If I understand this correctly, Section 103 (1) states that a site is “dedicated to theft of U.S. property” if the site is used within the United States and is designed or operated in a manner which facilitates or enables copyright infringement.

This means that any site that allows users to post content and comments are at fault. The purpose of the site is irrelevant, as long as users are able to post content. This means that YouTube, Facebook, Twitter, Wikipedia and a million other websites are “dedicated to the theft of U.S. property”. All you need is a feature that allows users to post anything, and you’re banned. Have a blog? If you deliberately fail to monitor all comments and uploads, you’re in trouble.

This is the real zinger. In Section 201 (b)(1) states that crimnal copyright infringement includes:  “…At least 10 copies or phonorecords, or of at least 10 public performances by means of digital transmission, of 1 or more copyrighted works, during any 180-day period, which have a total retail value of more than $2,500.” The way that the courts will determine retail value is by taking the value of the work and multiplying it by the views.

This means that if you upload a photo that sells for $1, and it gets viewed/used 2,500 times, you will be guilty of felony copyright infringement. Even if you sing a song and post it on YouTube, after the video has been viewed enough times to bring the retail value up to $2,500 the copyright holder may decide to sue you, and you now have a felony on your record. A felony, for posting on the Internet.

A few large companies chose to ‘blackout’ their websites yesterday in protest of this bill. Wikipedia and Reddit were offline for 24 hours straight – which left me wondering about quite a few things throughout the day. Google blacked out their logo, and Craigslist made you think about the bill for 15 seconds before it would redirect back to the site you were looking for. Several supporters of the bill have already reversed their opinions as a result of the widespread blackouts.

This bill will undoubtedly ruin the Internet. If it passes, and you continue to use the Internet the way you have been, you might be the next target of one of these copyright infringement lawsuits. It is widely thought that this bill will destroy any innovation and further development on the web. If it’s too risky to do anything new, nobody will try.

Now, after explaining some of this to all of you, I would like to ask you to visit this link and pass the message on to your Senators.

STOP AMERICAN CENSORSHIP OF THE WEB