Skip to content
Home » Blog » Who Would Google That?!

How would you like typing a serious question about international politics, for example, into everyone’s default search engine — Google —  and see in the suggested search box ‘france is set to concede that it is aware of an alien presence on earth by no later than Friday’? In the world of internet marketing, these small eccentricities amuse and confound. 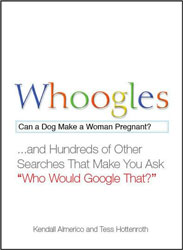 That is what the two authors of Whoogles have encountered. They started compiling screenshots of Google search suggestions as of January 2010, and not even a year later they have a few thousand compiled in both blog and book. And this is not their main focus, either – they are not internet gurus or social media pros nor do they work in search engine optimization – most of these  Google searches were simply found by chance, while doing research for their day jobs. It started when Tess Hottenroth was searching for an article about why tax day was on April 15, and “why is t…” came up with the a Google suggestion as appalling as it was surprising and laughable.

Definitely a confused moment, to say the least.

But from that first exposure, Tess Hotttenroth and Kendall Almerico have been keeping track of these Google suggestions. They bring a smile to your face, these ridiculous ‘Whoogles’ as Tess and Kendall have dubbed them, as in, “Who would Google that?” Typing in a serious query, people are likely to get something out of the blue – one of the suggestions for “Can I get…” has been “Can I get herpes from my cat?”

It says something about how far the internet has come that people are asking Google questions they would not rightly ask their mother, that in some ways the internet is becoming a more intimate compatriot and partner in crime than even your best college buddy. ‘Google’ is a verb in the dictionary now.

People have searched in Google if Google can hear them. Yes, really. “Google is a great thing,” the authors say, “It has brought knowledge to the masses at their fingertips. But it has also brought stupidity to the forefront.” A double edged sword, indeed – but true enough, “you can’t make up things this funny.”

So keep an eye out yourself for these Whoogles for a good laugh, or head over to their blog or check out their book for even more. And in closing – Kendall and Tess have said that they “expect a Christmas gift from Google for driving more traffic to them.” Well, good luck, Merry Christmas, Happy Chanukah, Kwanzaa, whatever you may celebrate, bah humbug and keep everyone in stitches with these Whoogles – I know I will still be keeping tabs.